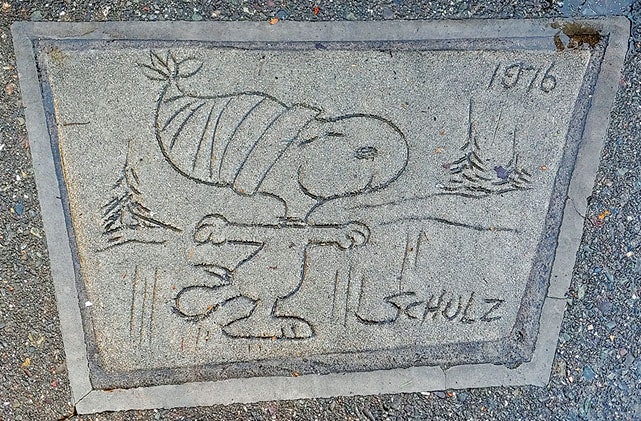 <p>One of the first signatures was Charles Schulz’s drawing of Snoopy, signed “SCHULZ” just as he signed each of his comic strips. </p>
60 Stops
Duration: 00:15:00

In 1976, before he ever dreamed of having a star in Hollywood, Schulz started his own Walk of Fame at the Redwood Empire Ice Arena, inviting stars of the figure skating and sports worlds to sign and date concrete bricks when they visited his arena. The concrete signatures are adjacent to planters around the arena plaza and in front of the Gift Shop.

You will see the following celebrity signatures:

The tennis stars played in the Snoopy Cup Classic, a tennis tournament hosted by Jean and Charles Schulz from 1983 to 1985 for players over 30 who were Grand Slam winners. The first two years were women-only tournaments; the final year included a men’s section.

Peggy Fleming, Olympic gold medalist in figure skating, was among the first to sign in cement in 1976. Fleming’s signature was appropriate because she had performed at the opening of the Redwood Empire Ice Arena in 1969, shortly after winning her Olympic gold medal in ladies singles.

Between 1976 and 2007, more than 62 additional signatures were added. Over the years, a few bricks have been lost but today 59 signatures remain around the planters in the plaza in front of Snoopy’s Home Ice and the Gift Shop.

Use this tour to follow the bricks to learn about many of the stars who came to perform or train at Snoopy’s Home Ice, formerly known as the Redwood Empire Ice Arena.